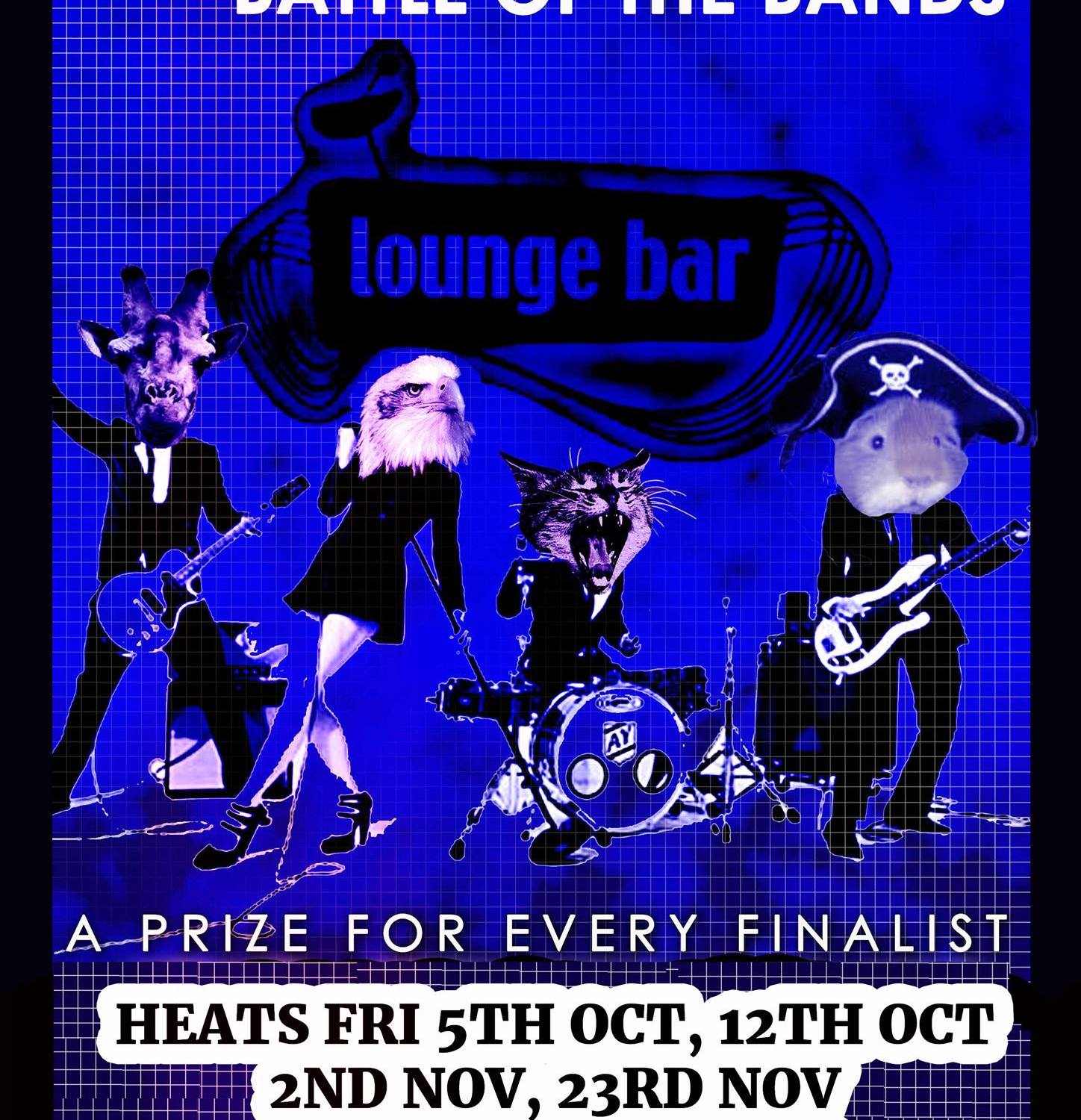 Friday the 7th of December saw the final heat of the battle of the bands (BOTB)  at The Lounge Bar in Alton. The four winners of the previous heats coming together in the politest musical battle royalé that you ever did see.

Unlike most BOTB competitions, cold hard cash money isn’t on the table for the winner, instead each band gets a prize that will help them advance in their career. The prizes consisted of recording time, photo shoot with a professional photographer, graphic design services or master classes. The winner gets their first choice of the prizes, second gets their pick of whats left and so on and so on.

So let’s have a quick chat about the venue. If you read my last blog about supporting local artists, you would have read about how much I love The Lounge Bar (you can read this here) but I’m going to reiterate this again.

The Lounge Bar may be small but she is fierce. For 10 years I have crossed the thresh hold of this venue, listening to bands I love and discovering new bands that soon became integrated into my regularly listened to playlists.

This place helped shape my passion for music as I’ve said before, and likely will say again, this venue is likely one of the reasons I still play music and review it so often here on this blog.

I will always support this venue and you can sure expect more reviews on the events they pop on in the new year.

So now, let’s talk about the bands. We have four in total to run through. The Thermic Syphons, Señor Fire, Juno and Flying Machines. I have broken down my thoughts on each band below and the prize they went for, because ranking isn’t important, supporting one another is. Don’t panic – I’ll link their socials and Spotify links (if they have them) so you can check them out for yourself. So let’s get into this shit!

Prize: Master classes for each instrument

BONUS: I caught up with the Thermic Syphons after their set and interviewed them. You can read that at the bottom of this piece.

So, this would be my second time seeing The Thermic Syphons after catching them in their BOTB heat and somehow this time they sounded even better than the first time. Sounding strong and well practised, with some strong as fuck vocals banging out each word; I cannot find a single negative to say about this band.

Their drummer, Beefy, dominated the stage. This guy is clearly really fucking talented and it’s a pleasure to watch someone who actually enjoys their instrument. Man can hold a beat, I’ll tell you that for nothing.

I expect nothing but big things from these guys. Talented, local Alton boys and honestly some of the nicest sweetpea’s I have ever met. They have left me sat wanting more and desperate for them to release more music. Come on boys, don’t leave me waiting too long; she needs her new music fix. Also, Alex, we see that waist coat honey and we feel that, you stylin’, but I did clock your little Busted esq jump there, we loved that!

Their stand out song for me is “Mother’s Wise Words” from their album of the same title. This song written by lead singer Nik is about being a sexually frustrated 18 year old. In a moment with the audience it would seem Nik is still as sexually frustrated at 23.

For me and certainly the people I was chilling with, The Thermic Syphons were our stand out artist for the evening, so much so I now have a shirt. I have popped a photo below, I know – you’re excited right? 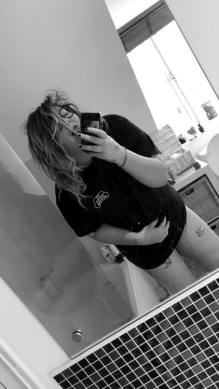 Before anyone panics, I am wearing shorts.

You can find The Thermic Syphons on Instagram here (even though they haven’t updated it since 2017 – come on guys) Facebook here, Youtube here and Spotify here

So let’s just get straight into this one. I fucking love Flying Machines. Honestly, they are the band I didn’t know I needed until they got on stage and started playing.

The passion and energy radiating from the front man when he was playing was just insane. You could feel the shyness as he addressed the audience; face down, no eye contact, inside voice. But damn boy, when you open your mouth and play that guitar I can feel your confidence and energy honey. It honestly was a shock and it took me by surprise but, you know, I was feeling it. I just want to cuddle the man, honestly. Plus that voice; I could listen to that voice on repeat for a week!

When listening to these guys, I got real Aqualung vibes. If you’re reading this boys, please cover Strange and Beautiful; you would make this blogger so very happy. I mean if you want to record it just for me I would also be very happy with that.

As you can see in the picture below, I bought a shirt because these guys struck a cord with me. Fucking support your local artists man and check this band out, because honestly the passion, energy, haunting beauty of their music and raw talent permeates from them. 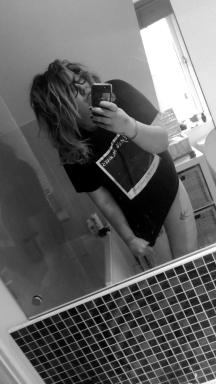 First of all I cannot find Juno on social media anywhere, so if anyone has any links please send them over so I can include them here.

So it’s true when they say you shouldn’t judge someone on age alone. This baby faced group of under 18’s certainly turned up and delivered some indie pop that even had me bopping my head along in enjoyment.

They are certainly something you would bang on whilst driving to the beach with your friends. Their Jamie T feel putting the bounce in a fairly heavier music themed night.

The term that came to our minds was bippity boppity boo. It’s that kind of music that you can bop to and not feel bad about it. Catchy and charming, it’s clear that this band has a long future ahead and with their already substantial following, they are only going to gain more traction.

Also shout out to their clearly talented drummer, however, knocking over the table at the start of the night kiddo… smooth.

So we are going to start by saying we certainly felt  the Christmas jumper vibe.

Where as Señor Fire isn’t my usual choice in music, I can certainly appreciate what they brought to the stage. I could imagine them playing in a German underground metal bar and fitting straight in. Or something that would be used in a dark indie film.

This is a band that clearly enjoys playing together and you can see the friendship both on and off the stage. I’ve also since realised I went to school with two of them, so that’s nice, Bohunt represent.

I also throughly enjoyed the medley they bashed out, because who doesn’t love anything that starts with the Fresh Price of Belair theme tune.

As promised find my interview with The Thermic Syphons below!

So after their set at the BOTB, I caught up with the guys from The Thermic Syphons and asked them some questions because I’m nosy. I stole the below photo from their Facebook. Sorry, not sorry. 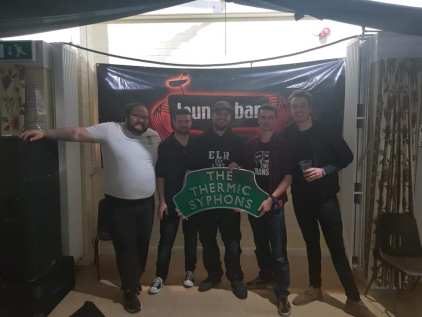 So we have left to right, Beefy (Chris), Alex, Tom and Nik with their pal in the middle there. As always I’ve put names next to who said what; otherwise we would all be confused and my input is in bold.

How long have you guys been playing together for?

Nik: We’ve been together two years, only a year as a four piece. (Beefy, Tom and Nik are the originals)  We had to make it sound a bit fuller so Alex came in to make it sound fuller, to fill the hole.

Alex: I’ve also filled my own hole. That sounds so disgusting.

Nik: You can edit this right?

Nik: First month and a half will be a bit of a break due to work commitments after that we have material, we are ready to go to do an album. We have got the material.

Nik: Summer is the best time for us, we get a lot of interest in the summer.

Alex: The Beatles to Slipknot for me, I listen to a massive variety of stuff. Nivarna.

Beefy: Machine head. I used to lov metal, really big, and now I play love songs with these guys. I used to play in a metal band.

Nik: There are also angry hate songs as well….

Alex: I’m surprised Oasis wasn’t the first on your list.

If you could work with anyone who would you work with?

Nik: The Darkness if they offered us to support them I would defiantly do that.

Nik: This isn’t for children to read is it?

Beefy: I’m a big fan of a drummer called Tony Royster JR, who is sick. I’d love to work with Ellie Goulding.

Alex: Brian May, he is an absolute musical genius.

Beefy: We already have a Brian May, he’s called Nik….

Tom: George Harrison or John Lennon. John’s lyrics and how George played his guitar, you know when George is playing, he’s got a very good style.

Nik: Pete Townsend, he’s deffo someone I would like to meet and play a few songs with.

Alex: I’d love to work with Slash. He’s the guitarist that inspired me to pick up a guitar. Listening to Guns and Roses when I was likely way too young, I was like I want some of that.

At this point some of the guys friends came in to say goodbye. Listening back to the recording had me in tears (of laughter), lots of chat about being paid for sexual favours, tattoos and trains. I can see why Nik now suggested three or four times I pause the recording. I also learnt Alex would like a floppy goats head bag pipe and he apparently makes really bad life choices. I also got hugged by a man named James. It was quite the eventful interlude.

Best gig you’ve ever been too? (This also then turned into favourite musical also)

Alex: Darkness at Camden or Steel Panther at Wembley… I’m torn. There were lots of boobs at both.

Beefy: Take that or Coldplay. Darkness, seen them a few times. Metallica. I quite like any gig I go too!

Tom: I haven’t been to many gigs… It’s not a gig but War of the Worlds was amazing live.

Nik: Live 8, I got to see The Who and Pink Flloyd reunite and my favourite musical is Les Misérables.

Explain your music in 10 words.

Nik: You nailed it mate.

You can catch The Thermic Syphons over in Medstead at the Castle of Comfort on the 22nd Dec. I suggest you do because I will also likely be there, great music and my face… what more could you want?

I was also promised the possibility of a Christmas song… Please play Wham. This is my official request.