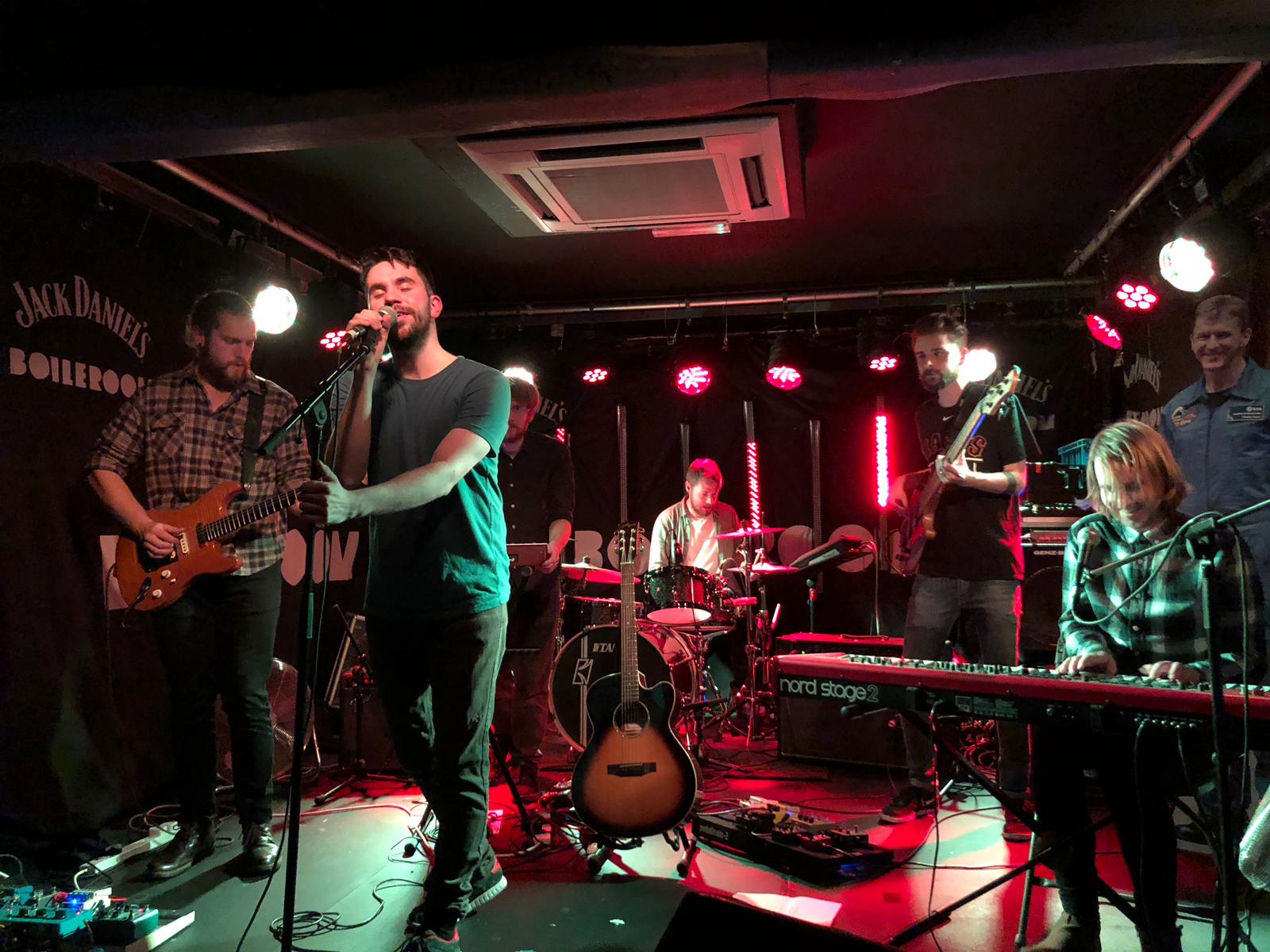 So I was lucky enough to be invited along to the album launch of Andy Ruddy’s second album Vital Signs, launching at the Boileroom in Guildford.

Let me start with the venue, the Boileroom has always been one of my favourite local venues to catch up and coming bands. With it’s quirky edge and honest way of doing things, the Boileroom offers an open space for everyone. You can check their website out here,  they are booked to the walls with different gigs, comedy acts and quirky events like drink and draw, punk rock yoga and the gamer lounge. Seriously check it out, there is honestly some thing for everyone. Plus the decor is sick af.

So let’s discuss the support act’s before we talk about the main event!

So when Martha took the stage and opened her face mouth to sing, the first thing that came to my head is that Martha’s voice belongs on the the John Lewis Christmas advert.

The haunting beauty of her voice resonated with me instantly. She has the kind of voice that you would listen to in bed, coffee in hand whilst reading the Sunday paper.

With every word, I was memorised and commanded by her sweet and strong vocals and her Segwaying between songs was incredibly funny and engaging. Shout out to her dad for the pj top too, that was one hell of a shirt.

The passion is evident when Martha is on stage. The way she plays and the way she sings, you can feel the love for her music spilling out and showing her soul to the audience. With her Eva Cassidy vibes, I can see her being played on a lazy summer day at a BBQ with the people I love.

So we have to start by saying, Moteh took an 8 hour Mega Bus from Scotland to play this gig. If that isn’t commitment, I don’t know what is.

The first thing that struck me about Moteh was his stunning vocals and the clear talent he had for guitar. He could be singing my weekly shopping list at me and I’d pop it on repeat and listen to it 48 times.

Moteh’s music is the kind of music you would put on during sunny afternoons at the pub, with cider in one hand.

You could feel the support for his music in the room, people captivated by not only his music but his chat in between songs. Even though he had a small issue with his tuner buzzing; it was completely unnoticeable with his powerful vocals being the only focus point for anyone in the room.

Want to find him on Spotify? Tough, Moteh rolls old school and only dabbles in CD’s. One of his song’s has a very catchy whistle in, which lead me to learning that one of my friends can’t whistle, which distracted me for a little while because watching her try and whistle was frankly hilarious.

One song that has stuck with me centred around a prayer sung to Moteh by his Ma, which frankly was lovely. As he progressed through the song, the more powerful his voice became, you could feel the pride and the love for this particular song proliferate with each word. Plus he was kind enough to credit Liam with a riff within the song, so here you go Liam, who ever you are, have your credit immortalised in my blog.

Just when I thought Moteh had me hooked enough, he then threw in a cover of Everywhere by Fleetwood Mac that honestly rivalled the original, which is quite the compliment being a huge Fleetwood Mac fan.

You can find Moteh on Instagram here and please Moteh, get on Spotify so I can spam my friends with your music. Thanks!

Now for the main reason we were all there. Mr Andy Ruddy and his launch of his second album Vital Signs.

Anyone who knows me, I wont listen to a band prior to seeing them for the first time if I don’t already listen to them because sometimes a band recorded sounds way better than the live version and that’s just disappointing for everyone.

Even if I had listened to Andy’s music prior, I would have left far from disappointed. I feel a little robbed that I haven’t had this extremely talented artist in my life before this launch.

So I hear you ask, if this night couldn’t be more about Andy, how could he make it more about himself? By being his own opening act and treating us with an acoustic set before his main set with his band.

So with a cut out of Tim Peake watching over him, Andy and his guitar served me some Frank Hamilton vibes which I have to admit, touched my cold dead soul. I’ve never been a huge fan of acoustic music, with the number of artists I listen too being less than 15, Andy has now put himself happily at the top of that list.

With ever note and key, it’s clear talent emanates from Andy, be it by himself or with fellow musicians, his voice is spellbinding and influential.

In his attempt of a love song from his new album, I could see Andy’s eyes searching for his lovely missus and the shine when he spotted her in the crowd was simply touching, catching a quick glance at her, I’ve never seen one person look like they are bursting with pride and love. It’s kind of the look I give a domino’s, but way nicer.

Looking round the room, you could see pride ooze from each of Andy’s friends and with the showmanship presented by the front man, how could they not? Funny, witty and charming, Andy served it all.

Once the rest of the band had joined Andy on stage, I was instantly given Bastille vibes and my head was nodding along within 30 seconds of the first song. I also clocked you, Mr Drummer. I see you nod counting. I thought I was the only one!

Originally  from Bradford, Ruddy’s first album served us songs about breaking out from the town. We were also treated to a song so new it hadn’t even made it onto the new album, about the flip side of the coin. Instantly invested, I even found myself having a little wiggle and getting more into it than my icy exterior usually allows.

What was lovely was, with each song, you could see the band relax. The enjoyment of playing shone through and the music just got better and better. I also really appreciated the use of a drum machine, worked really bloody well! When you put that many talented musicians together, you can only expect magic and they certainly delivered.

We also are 100% loving the shout out the parental units of Mr Ruddy received, once he had clocked them in the crowd, after traveling down from Scotland. We love a supportive parental unit!

Ruddy also has reached number 12 on the Sub Genre Album Chart on iTunes, which is a massive achievement and a huge congratulations to you. He also recently released his music video for “Boys And Girls Like Us” from this album, which you can check out here

I just have one question, where was the Peggy song?

All in all, I would throughly recommend Andy Ruddy and his music any day of the week. So go buy his new album from his website and check out his old one on Spotify. His website is here and Instagram here.